A few years ago we hadn’t even heard of escape rooms, but over these past couple of years they just seem to have gotten bigger and better. When we visited our first escape room we didnt have a clue what to expect, however were pleasently greeted with a full hour of fun…..finding clues, solving puzzles and unexpected twists and turns along the way, it was super exciting! We have also purchased a couple of escape room games in the past to play at home, which are great fun but can require a great deal of brain power and considerably more time, depending on the level of difficulty. 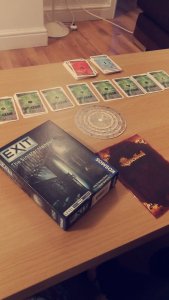 So anyway, take your average escape room and throw in virtual reality and there you have yourself an absolute escape room game changer…its the ultimate gamers fantasy, and we were fortunate enough to be able to have a go at a new venue opening soon, in Woolston, Southampton.

Sneaky Dog Escapes currently offers 2 virtual reality escape rooms, ‘Escape The Lost Pyramid’ and then the game we played, ‘Beyond Medusa’s Gate’. Both games are suitable for 2 or 4 players.

When we arrived Me, Char & two of our family members were greeted by the lovely owners and taken to the reception room for a briefing of the game, and here you’re able to lock away any personal belongings. We were then taken to our individual game booths to get set up with our virtual reality head sets and hand controllers…..and we were in! Well what can I say?! You need to experience this for yourself to see how impressive everything is, I mean I know it’s all computer animation, but I really felt like I was there, the graphics were unreal! Our first job was to each choose our avatars and what we wanted to wear, including head dresses which was brilliant fun, and this even included a mirror in the room to be able to actually ‘see’ ourselves too. It was hilarious seeing everyone as their avatars in their outfits, waving at each other. This is also very surreal….it’s crazy, you very quickly forget that you’re on your own in a booth with a headset on and a wire attached to the ceiling! Once you see the other players in the game you no longer feel all alone or silly for striking certain poses, because from that moment on you’re in that virtual world, and the game begins!

I don’t want to give away too much but this game is fantastic. It required a lot of team work and good communication skills, and there were lots of ‘wow’ moments, as well as some scary moments. I actually screamed out loud at one point, totally forgetting that what I was seeing wasnt real…that’s how good it was! But above all we just had so much fun. None of us wanted it to end, but as with all escape rooms the idea is inevitably to ‘escape’ which of course we did…but of course not before striking one last pose for the camera so we could enjoy a memorable keepsake of our time in the virtual world. Unlike Char I’m not a real gamer myself, however I found this so enjoyable and like nothing else I’d ever played before, and even Char, being a gamer said how amazing this game was, definitely the best escape room we’ve visited and we can’t wait to try out the next one.

The owners are very welcoming and were extremely accommodating to our every need. We feel very lucky to have had a sneaky preview at sneaky dog escapes, and know it definitely won’t be long until they become very popular and the ultimate ‘Must Visit’ escape room in Southampton. We thoroughly recommend trying it for yourself…you won’t be disappointed. Check out their latest offers here for a nice little discount too, as well as keeping up to date with news on other rooms, including non-virtual rooms coming soon!

Thanks again to Sneaky Dog Escapes, we wish you lots of success and will definitely be back!!