Before Dory and I got together, she and the little Dude co-slept, and although as a childcare professional I don’t necessarily agree with this, I understand that everyone’s situation is different, and for them, and the fact they lived in an overcrowded house with limited beds at the time, this worked. He would also nap during the day, sometimes at the wrong times, and I’m not even kidding he was one of these kids that could drift off for so much as 10mins in the car, and boom! He’d then be awake (I mean wide awake!!) until 10/11pm, literally bouncing off the walls!! And even then he would just drop off on the sofa after watching endless YouTube clips on the iPad (something I definitely disagreed with, but a habit that he’d got into, and it would cause major distress whenever anyone tried to take it away!) until he was then carried upstairs to his bed.                           That is until I came along!

The Little Dude was 3 at the time, and this was all he’d over known, so of course the transition was never going to be easy! But being so new into the relationship, I felt this was really important for all of us, we needed to establish a routine so that me and Dory could have together time, and so the Little Dude could get a proper night sleep without the need for late naps during the day. Don’t get me wrong, I’m all for children napping, and every child is different, but there’s no point letting your child nap at 4pm for an hour or 2 if you’d still like them to have a 7pm bedtime!
Just after we met, when Dory and the Little Dude still lived at home, I went away on a 2 week holiday to Morocco with my sister (it had already been booked, and yes it was hard being away from Dory for that long!) but this was the perfect opportunity to try out a new routine, without any interruptions (i.e sleepovers at mine)
So anyway, the first step was to get him into his own bed. The funny thing is he had his own bedroom which had been decorated completely with Marvel, and a new bed with a slide had been bought for him especially, but he had always had Mummy to cuddle up to, and her ear to play with (his favourite thing!) so being on his own was going to prove a challenge.

Dory started with cutting out the daytime nap. This was hard as he is such an energetic little boy and gets tired very easily, but with lots of things on hand to keep him occupied (lego, play dough, colouring books & outside activities etc…) she managed to get through the day! The trick was then to wind down, so Dory ran the little Dude a bath and then went straight into his bedroom for story time. He also had a sticker chart that we made, with a prize at the end if he managed a week of the new routine. Of course there was some upset as this was all new. Dude had common fears about being left and sleeping alone, but with some reassurance and staying in the bedroom until he’d fallen asleep, Dory was finally able to enjoy a peaceful evening downstairs.
Well Dory would tell you the first few nights were hell! He was up several times in the night, calling out and asking her to get into bed with him. He would fidget constantly and was very unsettled, also Dory was sleeping on the floor in his room which was painfully uncomfortable for her, so all in all not a very good combination. It would have been so easy for her to give in so she could get a good night sleep, but I urged her to persevere and to gradually move herself out of the room, explaining everything to The Little Dude so he was aware of all that was going to happen (this was all through text, from my sun lounger all those thousands of miles away, whilst sipping cocktails!!) I know, I know, it was all very well me telling her what to do as the professional, but she was the one having to endure the sleepless nights, and the tired miserable child throughout the day, and all the while missing me like crazy, so yeah on night 4 it all got too much and she eventually gave in!
He’d gone to bed ok, he was actually starting to enjoy bath time and story time, and Dory explained that she would be sleeping in the room next door (on a blow up mattress) so all was going well….that is until 1am when he woke after having a bad dream and was sobbing his little heart out. She tried to get him back to sleep, and he kept getting out of bed, this went on for an hour and a half…and all the while he was still crying, so not surprising she had a wobble and got into bed with him in the end. But these things happen, it’s not all going to be plain sailing, you’ve just got to put it down to one bad day and try again tomorrow. Which is exactly what Dory did. They eventually managed a full week of him sleeping in his own bed, he gained his stickers and got a reward at the end (some Marvel goodies) and everything was starting to pay off. I was so proud of them both!

Not long after I returned they both moved in with me. We had a bed next to ours for him to sleep on until we had sorted out the spare room. He would still call out in the night, and would sometimes try and get in with us, so there were lots of sleepless nights! It was hard, but he’d gone through a lot of changes recently so I was prepared to put up with anything as I knew the end result would be worth it! Then we finally sorted the spare room so he had his very bedroom (Marvel again, of course!) so the next big step was sleeping in there completely on his own. Dory obviously had her doubts, this was her baby who she’d co-slept with since he was tiny, she couldn’t stand the thought of him being upset in the middle of the night, but she knew she had to be strong. I, on the other hand was a lot stronger and up for the challenge. My training has taught me that kids need routine, and if we just stuck to it, it would eventually fall into place.

So it finally took us about 2 weeks of callings out in the middle of the night (this was a reassurance thing, I think he was so worried that we’d leave him that he would call out just to make sure we hadn’t!), the little Dude coming into our room several times during the night and being taken straight back out again, him waking up in the middle of the night in tears asking to come into our bed, and also freak outs just before bedtime. But we actually cracked it!!!! We were so ecstatic, truly! It didn’t take long for all of that to stop, and we finally have that little boy in a great settled bedtime routine. We do stay in the bedroom reading until he’s fast asleep, but it’s usually 3 books tops (1 sit up book and 2 lay down with eyes shut books) and when it’s morning he’s allowed to come in to our bed for morning snuggles. I also read some great tips on this blog about bedtime routine, and especially the tip about stirring the child before we go to bed, just enough to arouse them and change their sleep cycle so they fall back into a deep sleep (we do this by tucking him in again, as he’s always wriggled out of the covers, giving him a kiss and whispering “I Love You’ into his ear, at which point he usually responds “I Love you too”) and it really does work! http://www.yourmodernfamily.com/your-modern-family-blog/

The Little Dude will always be a fidgeter, and he is a definite sleep talker, but we got him out of the ‘iPad before bed’ habit, and now if he has a nap during the day we make sure it’s an early one, and then just stick with the routine as usual. He definitely needs his 12 hours or more a night! 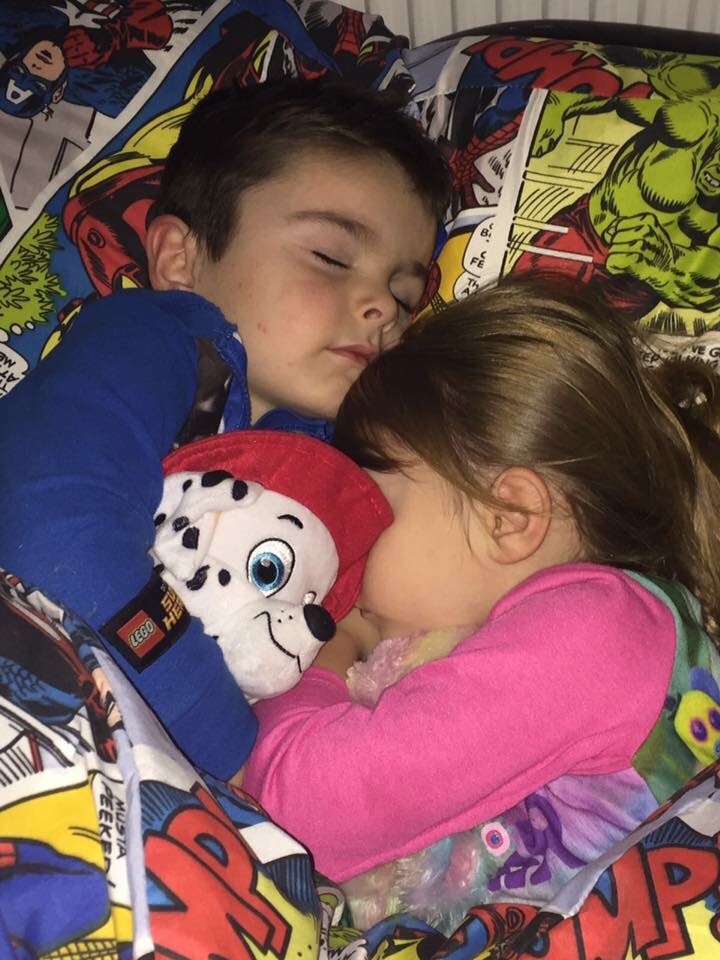 The key really is perseverance, just stick with it and I promise it’ll pay off!

“He leaned over and kissed him goodnight. Then he lay down close by and whispered with a smile, “I Love You right up to the moon – and back!” ~ Big Nutbrown Hare